My favorite soldier through the recurring campaigns has always been Shingen "Okami" Takeda. Unimaginatively named after a famous Japanese daimyo during the Sengokujidai, he has always been the name of my Kiryu-Kai Master Sergeant - the maximum level soldier you receive if you pick this Japanese starting perk - and he was my proxy in this virtual world. Come on, who doesn't want to be the bad ass leader of a troop of bad ass soldiers defending the world? No one else? Just me? Alright, fine. So I'm immature.

In this version of the X-Com universe, he wasn't my first Master Sergeant - "Tenshi" Hatakeyama received that distinction due to RNG - but I thought, hey, I can choose my best Japanese rookie, and through careful leveling, recreate the badass that was Takeda. There have been six iterations of Takeda, and I was hoping the seventh would emulate and even surpass the heroics of his brethren.


Anyway, he's dead. He died along with "Eldaeriel" Alonso on an abduction mission that went bad. Once again cyberdisks proved how much of a menace they are, atomizing both soldiers with its main cannon. Normally we can lock down these menaces with snipers using Disabling Shot or by suppressing them, but I was caught badly out of position due to a faulty assumption on my part. I assumed a tiny sliver of darkness we bypassed was clear of enemies, but it wasn't, and when the cyberdisk and its cohorts came storming out of the black my squad was strung out and scattered. By the time we were able to recover both soldiers were dead.

There is an upside. If I can keep going without my proxy, then chances are good that I can see this through to the bitter end. I have been very disciplined in preserving the integrity of this playthrough - I haven't reloaded once. I had such high hopes and heroic story arcs for Jeromai and Okami, too. The war goes on, though, and more caskets are sent home to grieving virtual widows and orphans. The complete casualty list for July is as follows: 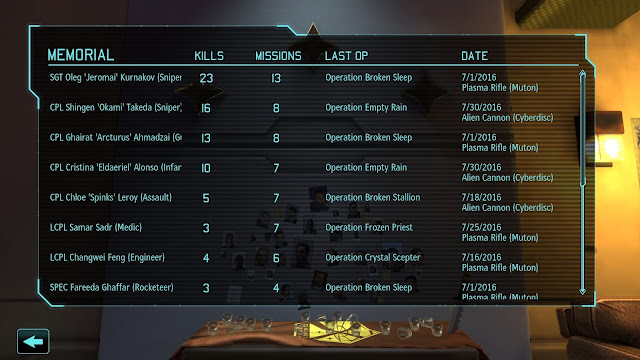 This takes our casualty count to 14, and the mounting toll is a cause for concern. If I can be so callous, losing rookies is not a problem - losing soldiers ranked corporal or above is. Between Okami, Eldaeriel and Spinks we lost a lot of veteran experience which will take time to replace. In addition to the fallen soldiers we also lost both SHIVs. This wasn't as bad, as both SHIVs were obsolete - we were in the process of creating alloy SHIVs which are a significant upgrade. Nonetheless there is still cause for optimism, thanks to the battleship we were able to capture at the beginning of the month. The soldiers were outfitted with carapace armor for the first time, and six more soldiers earned their call signs. Upgrades to the Officer School meant that Hatakeyama was promoted to Captain and two new lieutenants - Jack "Coreus" Shearer and Hiroshi "Tengu" Hara - were inducted. Coreus continues to defy all odds. In another reality his interred remains have lain under ground for months now. In this one he is an X-Com officer.


Another country withdrew from the Council after being bombed, raided and harassed by the invaders. India was the fourth nation to leave the X-Com project, and the skies were becoming increasingly unfriendly. After the silence of the previous month, with several satellites now up in the air the X-Com board became lit up like a Christmas tree. 13 contacts were tracked this month, and only two were shot down or destroyed. A scout was destroyed over Mexico, and a raider was shot down in the US. Two UFOs - both raiders - landed and were assaulted and secured by X-Com. The remaining nine UFOs were able to conduct whatever nefarious activities they were doing unmolested. We had a bunch of satellites, but not enough planes to cover all the nations. An alien fighter (UFO-33) shot down the satellite over South Africa.


On the ground X-Com conducted 12 missions - four abductions, one UFO recovery, two UFO assaults, three EXALT missions, one Council mission and one terror mission. Our mounting losses did not stop us from completing all the missions successfully. The tactical focus this month was the capture of live alien specimens for Dr. Vahlen. Capturing and interrogating aliens have a dual purpose in the Long War. Firstly, each alien species provides research credits which significantly reduce research times in their particular field of expertise. Secondly, captured alien weapons provide plasma cores, which are an essential part of constructing Tier 5 plasma weapons. One core equals one weapon, so there is cause to capture duplicate specimens, if only to acquire their weapons.


Capturing aliens is a dangerous and frustrating exercise because arc throwers - stun guns - have such short ranges and approximately 50% success rates in the Long War. An alien on three bars of health has a 42% chance of being stunned - an alien on two bars has 48%, and an alien on one bar has 54%. Our standard M.O. is to isolate an alien by killing its comrades, corral it with flashbangs, suppression and Disabling Shots, then approach it with engineers kitted with arc throwers. The troops use pistols to whittle down its health, preferably down to one bar, before our intrepid engineer zaps it with an arc thrower. If possible I also like to have the commanding officer nearby to use their Command ability. The Command ability gives your soldiers an extra move, so if at first the stun doesn't succeed the officer can use Command to give the engineer a second chance at stunning the alien. This still doesn't guarantee success, and I can't count the number of times a pistol shot that was supposed to nick or graze an alien down to one or two bars accidentally turned into a crit and ended up killing the mark.


In the month of June Changwei Feng from China was the first X-Com trooper to successfully stun and capture an muton. "Oni" Okamoto was the first trooper to field test the arc thrower, but her attempts to stun the alien just failed utterly, and the muton had to be killed by "Tenshi" Hatakeyama before it could blast Oni to smithereens. Luckily Feng was able to succeed where Oni failed, but he did not live long to enjoy the accolades for his feat - he died this month to muton fire. Engineers, along with assault troopers and scouts, have short life spans.

In July X-Com was able to capture a thin man, a floater, an outsider, a sectoid and another muton for the labs. In the period of June and July X-Com operatives used arc throwers 14 times and scored six successful stuns, so our overall batting average is at around 43%. These specimens were a research bonanza, and unlocked decreased research times plus new foundry projects for R&D.

Previous: Kiss of War, Part V - Diaspora
Kill Event is the colloquial name for the tail end of a larger event known as Mightiest Commanders, and it involves all players trying to amass as many kills as possible during a 48 hour period. Clearly it is an event that is common among games of this genre, as the EGG leadership posted about it well in advance and warned everyone about the possible ramifications, the most dire being the possibility of being zeroed. Being zeroed entails the theft of all your base's resources and the death of your entire army, and this occurs when you can't defend yourself adequately against a raider, or a group of raiders.
There are five things of value in this game:
(1) Officer level, talents, and skills. (2) Army quality and size (3) Base tech level (4) Resources (5) Guild tech level
Your technical goal in this game is to steadily increase all of these items. Out of these five items only (2) and (4) can be affected by enemy players. Armies can be killed, and…