I was AFK from the blog from about mid-July to the end of August, but am planning to return to posting regularly this month. In terms of content I'm planning to keep working on my Long War playthrough report, as well as resuming work on my fan fiction. The playthrough chronicled in these so-called War Diaries serves an important function in giving me an X-Com timeline with which I can intersperse real life events and my fan fiction. My playthrough and my story have diverged significantly, but the timeline generated by playing the game still allows me to get an idea of where X-Com's gear level is at any point of the game calendar. It also gives me an idea of the geopolitical situation - by September 2016 five nations have left the X-Com project already, so when plotting my fan fiction I would like to have an equivalent number of nations withdraw by this point. They won't necessarily be the same nations, but the purpose of the fan fiction would be to flesh out which nations do leave and why. The story is still stuck somewhere between May-June 2016, so there is still time to square up the fiction with the playthrough timeline. When I stopped blogging I also stopped playing X-Com, so my game state is still halted at around December 2016.

In the August 2016 report I praised the resiliency of the Canucks in holding out against tremendous pressure from the aliens. In September the aliens turned the screws even further, and the country had finally had enough and withdrew from the X-Com project.

Five nations had now left the Council but the loss of Canada was a telling blow, because we lost the continental bonus which was the 25% discount to the purchase and maintenance of interceptor craft. With our interceptor fleet growing we needed every dollar we could scrape together. Our original plan was to assault the base in Russia, but that was scrapped in favour of an assault on Canada to restore the bonus. It would have to wait, however, until the skeleton key was completed.

In the meantime September 2016 was a busy month for X-Com. 19 UFOs were tracked - the most number of contacts since X-Com went online - and X-Com were able to shoot down or destroy 9 of them. Two scout class UFOs escaped, which was a big lapse for our air wing, because successful scouting missions are followed by larger UFOs. Destroying a scout usually cuts off that incursion by alien forces, and they probe elsewhere. The bigger UFOs we either let go or allowed them to land. Our air force still can't tangle with large or very large contacts, and it's still better to allow abductor class vessels to land and deal with the abduction mission that follows. Two very large contacts which we let go led to a terror mission and the loss of Canada respectively - presumably the massive ship forms the nucleus of the alien base once it lands.

On the ground X-Com conducted 15 missions this month - five UFO recoveries, one UFO assault, two (!) terror missions, four abductions missions, two EXALT missions and one Council mission. One of our most desperate missions was the Council mission which required X-Com to disarm a bomb in South Africa. The squad pushed forward aggressively and were able to defuse the bomb, but in doing so had to aggro numerous pods to beat the clock. Four soldiers were lost in the firefight around the bomb, but once again "Akuma" Ishikawa showed his chops by salvaging the mission through accurate fire, picking off aliens one at a time. The aliens killed four X-Com troops and critically wounded another. Our medic dashed forward and stabilized him but was shot and killed doing so. The remaining three soldiers had a choice - withdraw and leave the critically wounded man to die, or try to complete the mission and save him. Akuma chose the latter, and in a tense, long and painstaking effort the three survivors drew the aliens into ambush after ambush and killed them singly until they were all dead.

This mission was a stark reminder that you're literally one step from disaster in X-Com. We lost nine more soldiers in September, taking our overall tally to 24 dead. Our casualty count represented the single greatest loss of life in a month to date. In addition to the deaths we also lost the use of three soldiers who were critically wounded and would be confined to the infirmary for 45 days or thereabouts. This was partially offset by the two soldiers - "Akuma" Ishikawa and "Eva" Ivanova - hitting maximum level, but nevertheless it was a bad month for X-Com, despite completing all their missions. "Ophelie" Scholz also died this month, paralleling her fate in my original playthrough which gave rise to the Long War fan fiction. At least in this universe she lived six more months. 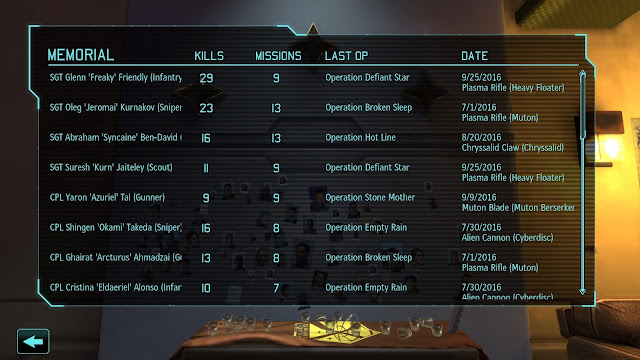 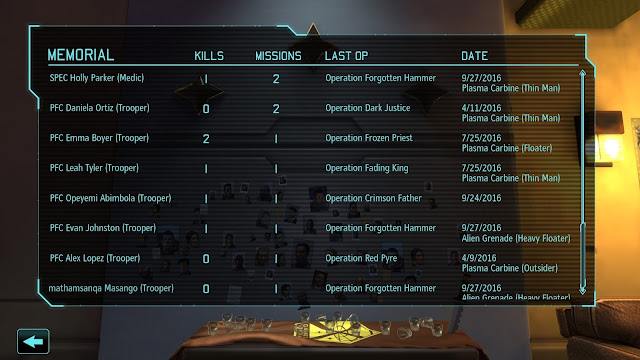 The psionics lab also went online this month, and after a few misses X-Com was able to anoint its first psyker, Rebecca Long of Singapore, shortly followed by Waja Towagozi of Syria. Psionics in the Long War is a little random - psi experience is earned during missions and once a soldier hits a certain amount they can attempt to train a new ability. The chance of learning this ability is roughly 50%, modified by will power and a national bonus from Mexico, and takes about a week or so. The RNG element means that you might have to do a few attempts depending on how lucky you are. It costs nothing but time, but the downside is that the soldier is effectively off your active roster, and so you have to be judicious as to who you train, and how many you train at once, lest you need those soldiers on your missions. The type of abilities available is also dependent on the aliens you have interrogated, which gives you another incentive to capture those aliens in the field.

By the end of September X-Com had manufactured a skeleton key, increased the Skyranger capacity to 10 soldiers (for base assaults only), developed advanced gauss weapons and unlocked the capability to create MECs. Our goal for October would be to assault the Canadian base and liberate the Canucks from the bondage of their alien masters.

Previous: Kiss of War, Part V - Diaspora
Kill Event is the colloquial name for the tail end of a larger event known as Mightiest Commanders, and it involves all players trying to amass as many kills as possible during a 48 hour period. Clearly it is an event that is common among games of this genre, as the EGG leadership posted about it well in advance and warned everyone about the possible ramifications, the most dire being the possibility of being zeroed. Being zeroed entails the theft of all your base's resources and the death of your entire army, and this occurs when you can't defend yourself adequately against a raider, or a group of raiders.
There are five things of value in this game:
(1) Officer level, talents, and skills. (2) Army quality and size (3) Base tech level (4) Resources (5) Guild tech level
Your technical goal in this game is to steadily increase all of these items. Out of these five items only (2) and (4) can be affected by enemy players. Armies can be killed, and…