April 26, 2019
The weekend of April 20-21 was a Kings of War weekend for me, having played an introductory game for Pumimin on Saturday, and having another tussle with my regular sparring partner Takatori-San on Sunday. On Saturday I brought my Kingdoms of Men all mounted army and steamrolled Pumimin's Abyssal Horde in about three turns. I'm a bloody idiot. Way to ease someone into the hobby. Just in case you're wondering what kind of name is Pumimin, it's actually Fujimi-San's Twitter handle, which is the platform through which otaku of all stripes keep in contact in Japan. I hope he persists with Kings of War, my idiocy notwithstanding. He didn't appear to take it badly, but I can never really tell with Japanese folk, with all their years of tatemae practice.
For Sunday I took an Empire of Dust army to Koganei where they had a good scrap with Takatori-San's vanilla Undead. I lost that one after my right flank finally collapsed and his werewolves came loping around my line. Prior to that the skeleton and zombie hordes just pushed and pulled each other somewhat ineffectively, causing a little bit of damage here and there which was offset by the Lifeleech rule. Even in horde formations they're only really useful as tarpits, as they lack the Defense penetration brought by units with Crushing Strength. 30 attacks looks good on paper, but once probability kicks in it gets reduced to an average of 5 damage against a 4+ Defense foe. The Scorpion on the other hand was worth its weight in gold. Crushing Strength for the win.

I also played my first ever game of Kings of War: Vanguard, which is Mantic's skirmish level game akin to something like Mordheim or Age of Sigmar. It was pretty fun once I got to grip with the rules, and much like Deadzone or Kings of War Mantic have once again come up with a simple ruleset which belies the tactical depth of their games. I'll play it again, but at the moment my mind is thankfully off the ruthless acquisition of miniatures, and more on playing the board games I brought back from Australia in early April. I've been learning the rules for Nemesis, a new boardgame which was funded on Kickstarter in 2017-2018, and will hopefully pop its cherry during Golden Week. I also have Relic, Supremacy, Doom and Star Saga all waiting to be cracked open and validated. I hate not playing board games I acquire, because it confirms that I have wasted my money on a material acquisition which in the words of Marie Kondo, never "sparked joy" for me. What is the point of collecting these bits of cardboard or plastic? When I buy them I think they will enrich my life, but in reality they just encumber it. They only gain value when played or shared with other people, which drives me to actually go out and meet people to play with. In that sense I guess they're good, as they provide an impetus for socialization...? 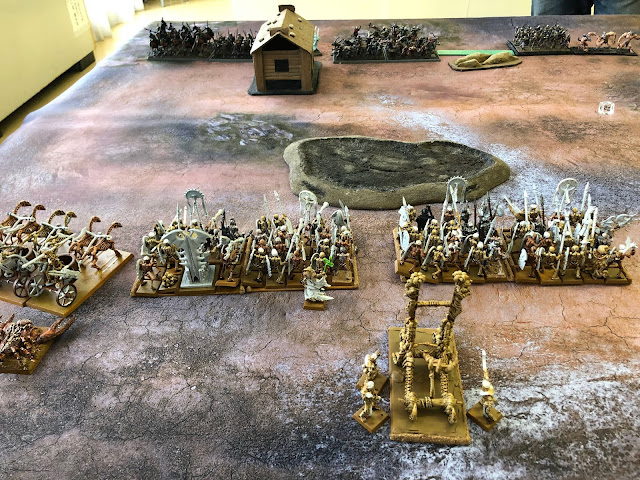 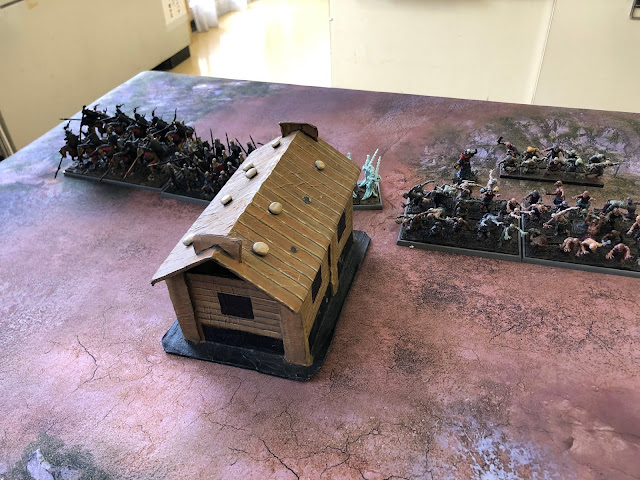 Speaking of playing either my Empire or Tomb Kings will be pulled out for another game on April 29th for a game of The Ninth Age. Much like Takatori-San is my KoW sparring partner, Rodion is my T9A nemesis. In fact, much of Golden Week will be spent gaming all over Tokyo. I have no plans to travel this holiday, having expended much of my money in showing my sister and her family around Tokyo, going snowboarding, and finally returning to Australia to celebrate a wedding. I'm broke. One of the good things about miniatures is that once you have them you can paint them, so if you're too poor to go sliding down a mountainside or jetting off to another country you can always shut yourself in and either prepare for games, or try to tee up some games. I have to say that I've been feeling dissatisfied with my hobby recently, and wondering what to do with myself. I should go back to boxing. A few punches to the head and I'm positive that all the ennui will get shaken off quick smart, and the simple joys of watching a project grow and take shape will snap back with crystal clarity.

With patch 5.4 just around the corner this might be an opportune time to review some of the upcoming changes to WoW PvP, as well as to briefly summarize the changes that have been implemented in PvP from 5.2 to the present. The information in this post should be correct at the time of writing, but please keep in mind that 5.4 is still in PTR and is liable to change at any time. I have also refrained from commenting on class balance changes, instead focusing on the overall changes that will impact all players in the next patch.