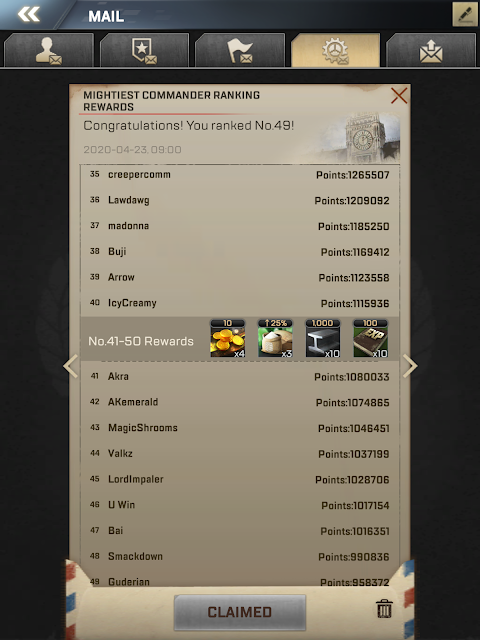 Previous: Kiss of War, Part V - Diaspora Kill Event is the colloquial name for the tail end of a larger event known as Mightiest Commanders, and it involves all players trying to amass as many kills as possible during a 48 hour period. Clearly it is an event that is common among games of this genre, as the EGG leadership posted about it well in advance and warned everyone about the possible ramifications, the most dire being the possibility of being zeroed. Being zeroed entails the theft of all your base's resources and the death of your entire army, and this occurs when you can't defend yourself adequately against a raider, or a group of raiders. There are five things of value in this game: (1) Officer level, talents, and skills. (2) Army quality and size (3) Base tech level (4) Resources (5) Guild tech level Your technical goal in this game is to steadily increase all of these items. Out of these five items only (2) and (4) can be affected by enemy players. Armies can be kil

Kiss of War, Part I - Virtual Vixens of World War 2

Thanks to the global pandemic sweeping the world I have had the opportunity to waste several hours on a new free to play game called Kiss of War . Social distancing had only recently swung into effect in Japan, and even then my workplace continues to have us come into work and share rooms with large numbers of people. Trains still run, workplaces are carrying on as normal, and toilet paper – after a brief one week period – is once again readily available. Only masks remain elusive, and that's partly because the corona epidemic hit at the same time as hayfever season in Japan. Every February to April perhaps a quarter of the population don on masks as invisible clouds of cedar pollen (“sugi”) descend out of the mountains and hyperstimulate the immune system response of a significant fraction of the population. Japan has the highest allergy rate in the world, something I found out to my chagrin as I began manifesting hayfever symptoms in my third year in Japan. Since that time I have

This is an account of my Total War: Warhammer II Mortal Empires playthrough. It is ongoing – I haven't finished yet, which means I could still lose, and probably will. The game is being played on Legendary difficulty. Manual saves are disabled, and the game automatically saves at the end of turns and at the conclusion of battles to a single save game file. No save scumming here – whatever happens, happens. This is my seventh Mortal Empires campaign on Legendary since the game was released. I have not won a single one yet. Four games I played until the bitter end, with the end coming after Altdorf was surrounded by enemies. In each case it was the Vampire Counts running rampant, with the Varg piling in at the bitter end to take advantage of the Empire's weakness. I have won on Legendary difficulty on the original Total War: Warhammer , and that was not nearly as difficult as it is here in the sequel. For one, the Skaeling and the Varg capture cities now instead of razing